‘여행’ translates to ‘travel’ and this is a series of posts about my trips for every year in the life.

In such an adventurous whim, workmates and I made plans to go hiking. I welcomed the idea as I’ve tried it, even just once before, and it was fun, to put it simply. My quests usually include the beach but I’m very open to anything, especially with people whose company I enjoy.

So there, we – ehem, they – chose Mt. Capistrano in Bukidnon. To be honest, I didn’t know it existed! But since most of these friends are from the province, then I just have to trust them. Haha

Friday, June 10th, we set off to Bukidnon after work so that we can start early for the climb the next day. But first, we bought essentials (#FOOD) and had our dinner. I brought my stuff already to avoid going back home and wasting time~

Less than 2 hours later, we got to Manolo Fortich and stayed in Jera’s house. (Riding a jeepney from Agora Terminal cost us 35 pesos each.) We were all beat. Also, thinking of our looming adventure, rest was definitely in our minds.

We woke up around 3 or 4AM, prepared ourselves, had breakfast… There was still approximately 2 hours travel from Manolo to Aglayan, Malaybalay City and we left past 5AM. Bus fare was more or less 75 pesos.

Fast forward… Our tour guide – He-who-must-not-be-named – is someone my workmates know well and he’s actually a mountaineer! We rode his pickup and got to the base of the mountain at Simaya by 9AM?

Now, here’s the real deal: to start, you have to register and pay an entrance fee of 20 pesos. 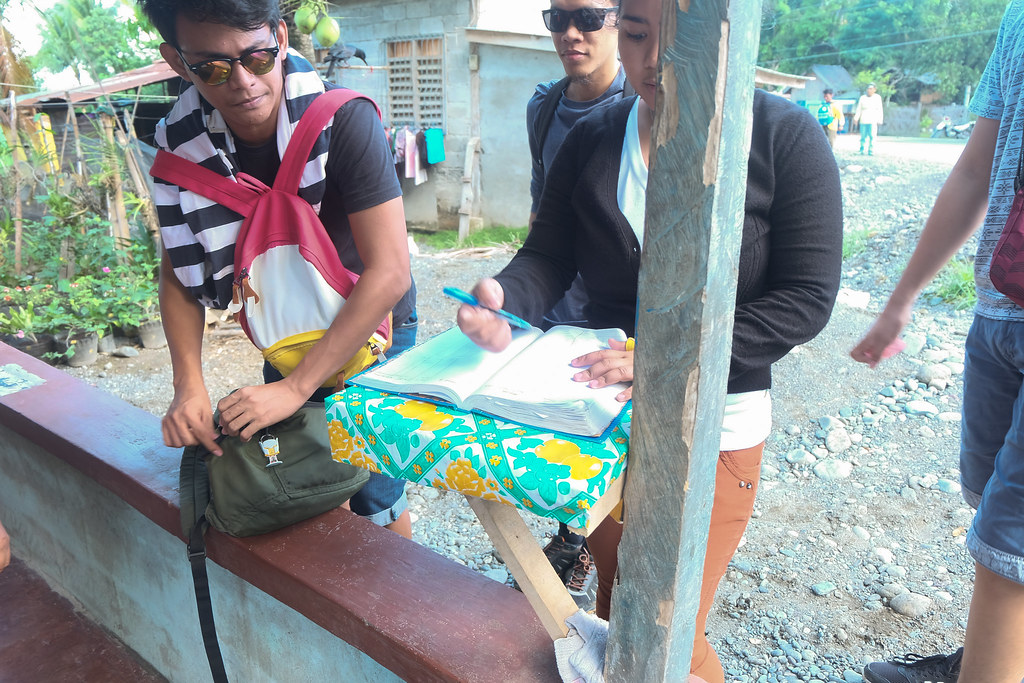 The lady in charge warned us to not be hard on ourselves during the hike since apparently, someone fainted and had to be rescued. Yikes. That scared the unathletic me! 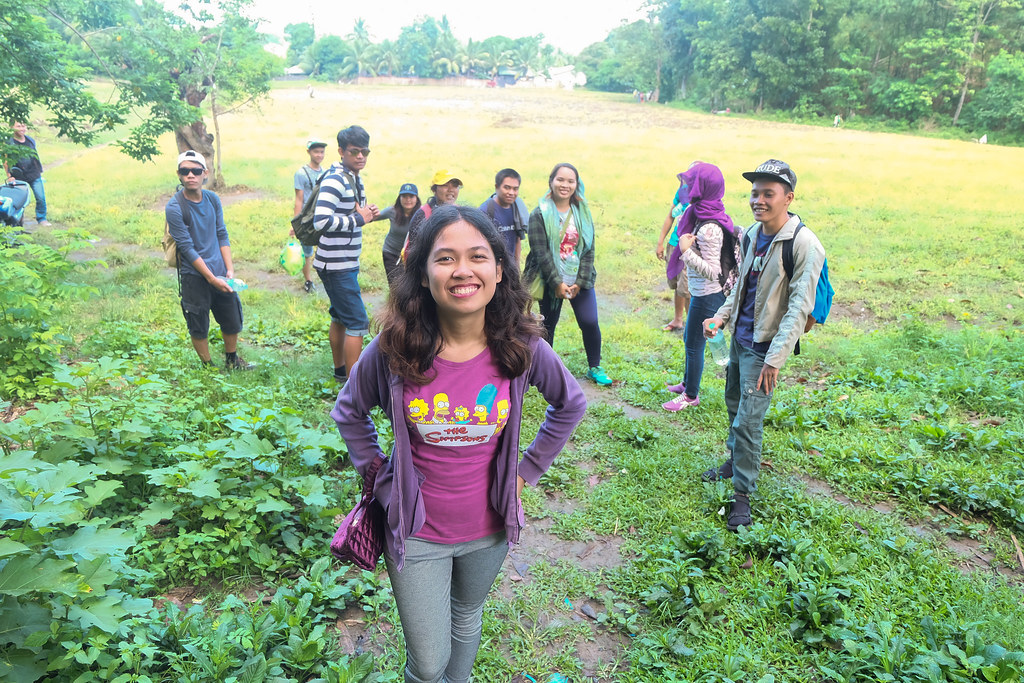 Oh girl, you still don’t know what you got yourself into. Smile for now. Lels 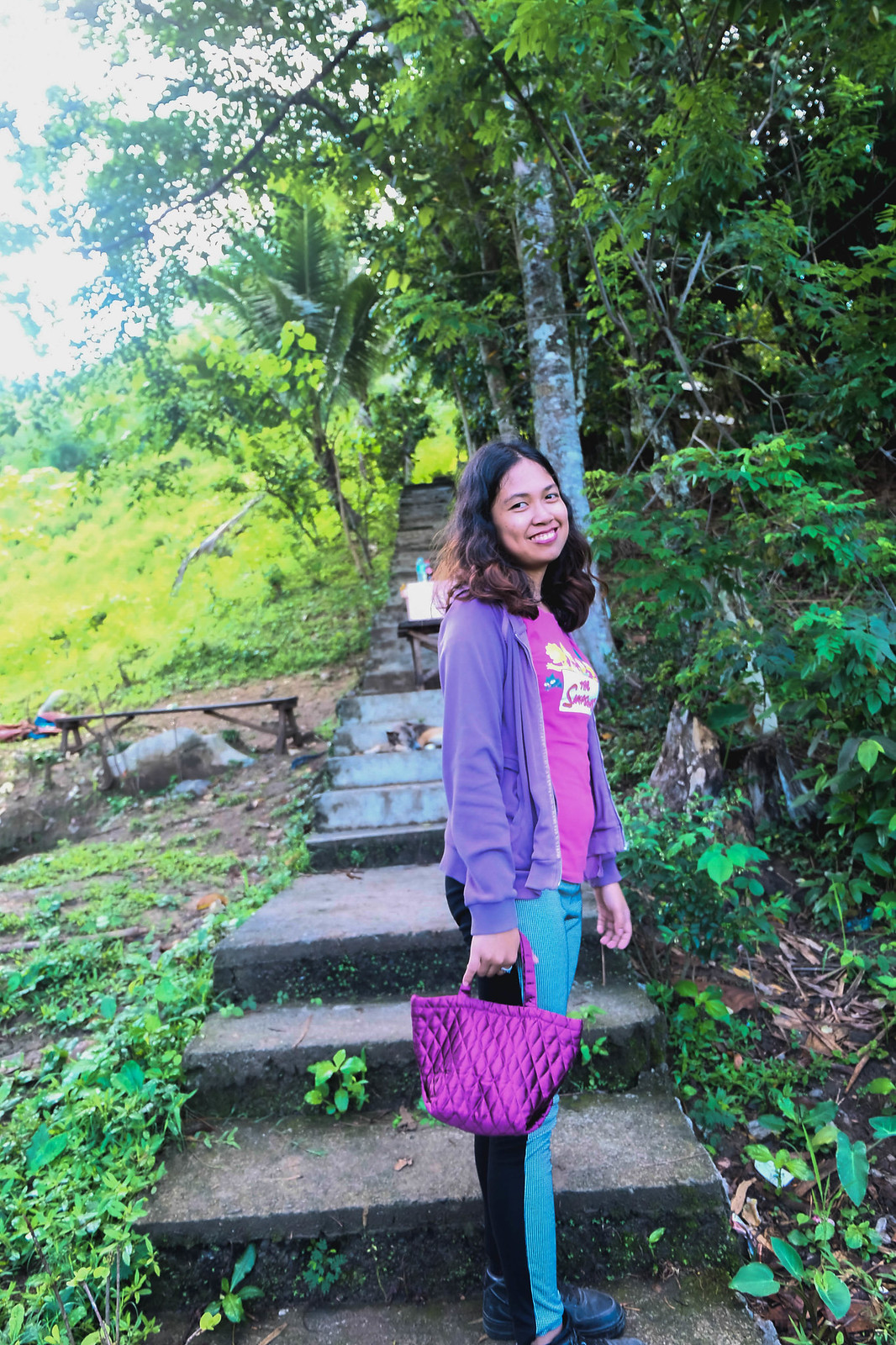 You’d think I was going to a picnic. Hahaha this was for my camera, okay?! I don’t have a proper bag yet and we left our backpacks in the car – THANK GOD.

As you’ve seen, the first part of this ascent was climbing the cemented stairs. And it was crazy! Too tiring. And there was a freaking goat, I thought I’d be its victim. Lels

(Most of the photos of this trip are not really taken by me, which is sad, since I wasn’t able to tweak settings according to my liking but, oh well. Hihi) 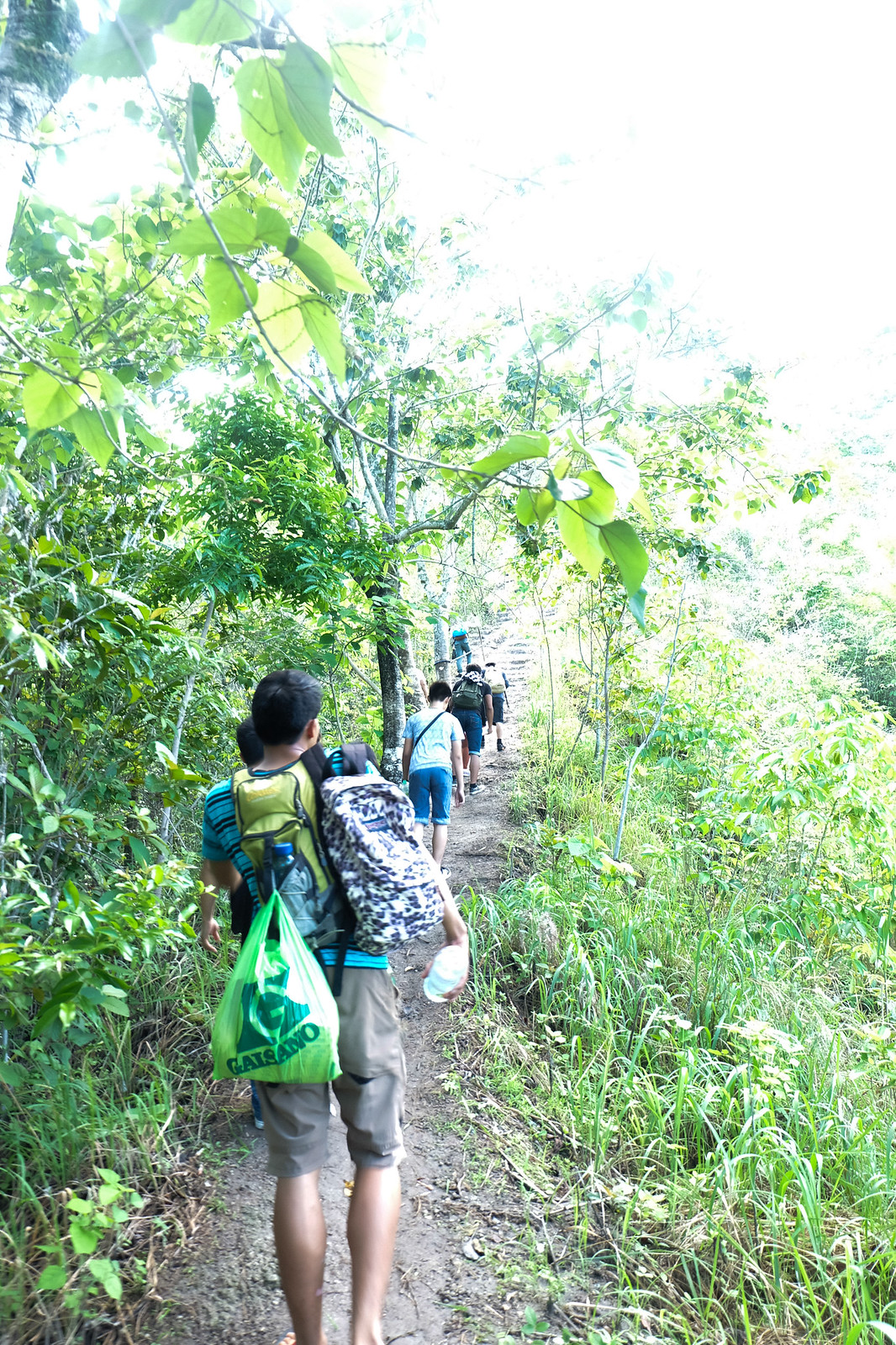 He didn’t want to be photographed but oops, sorry, man! Haha he’s pretty cool and funny. This guy brought some of our bags without any issue like WHAT A PRO 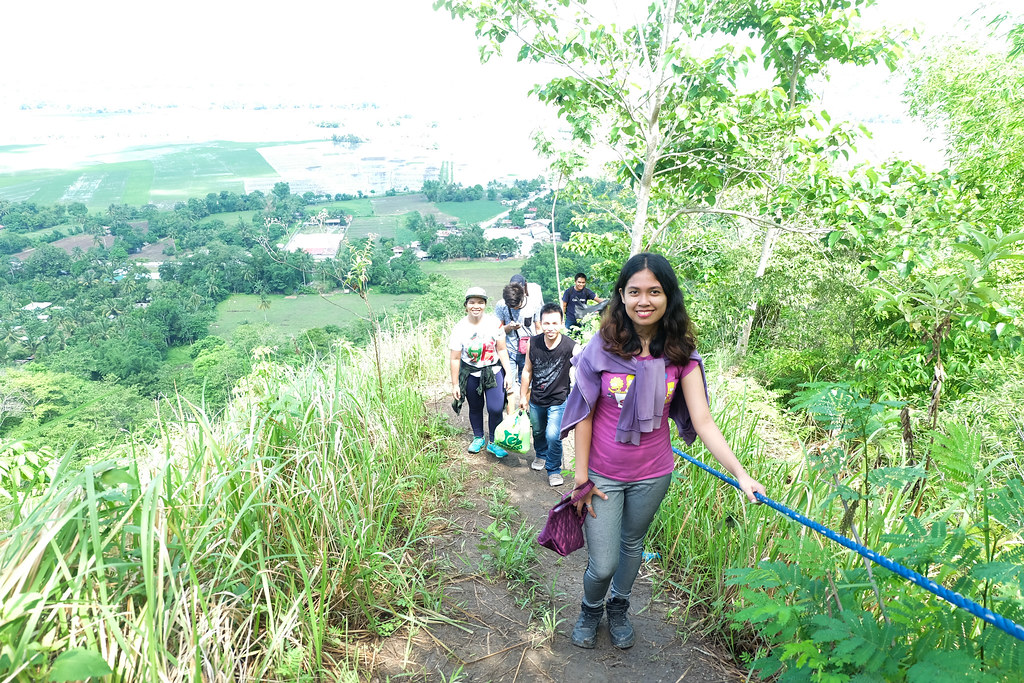 To climb this area, we had to hold on to this rope and you have no idea how I felt so helpless and klutzy (though I’m all smiles here). Haha it was starting to get really elevated and in my mind, I was like, “I’m going to fall! I’m going to fall!” XD On top of that, I think this was where we saw somebody in a stretcher brought by rescuers. I worried that I’d suffer the same fate, given my state of health…

The trail was certainly not easy for me and I had to take a lot of breaks. It was said that you can finish the hike for just 2 hours, but I’d rather not push myself too much and faint. One of us even “surrendered” and chose to not go further. Her boyfriend accompanied her while we continued, so all is well.

Because my life is more important than documentation, I kept my camera and chose to survive the ordeal first. I actually can’t keep count how many times I said, “I give up!” Hahaha

It rained the day before so there were muddy parts and I hated that! It became slippery and like the worrywart that I am, I was uneasy about going down even when I was still on the way up. Lels indeed, what did I get myself into?!

Then again, this view greeted us at the top: 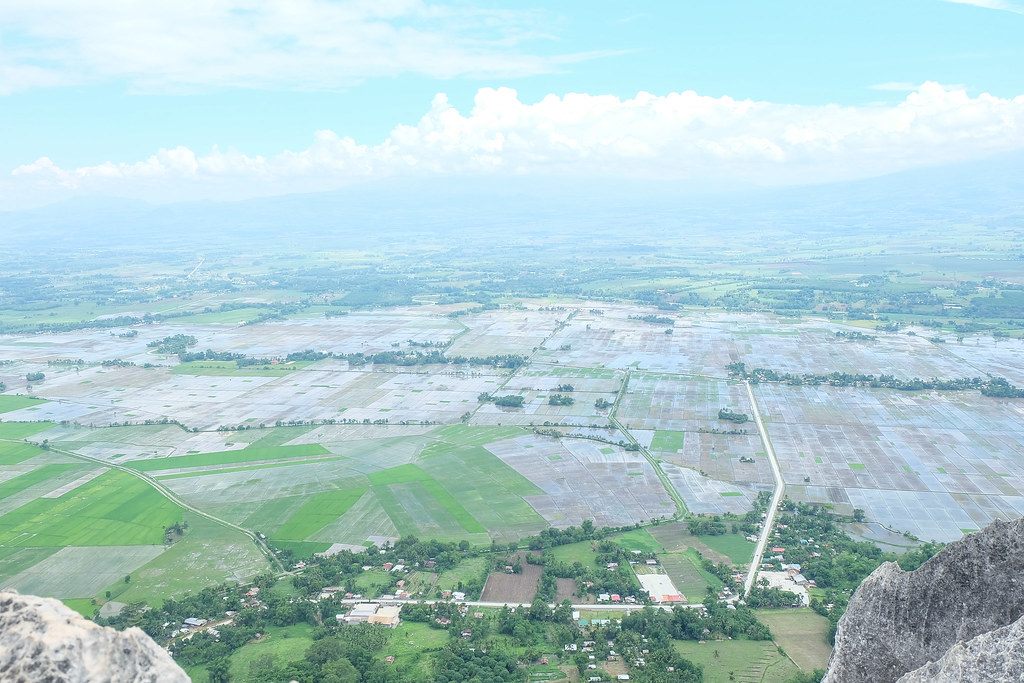 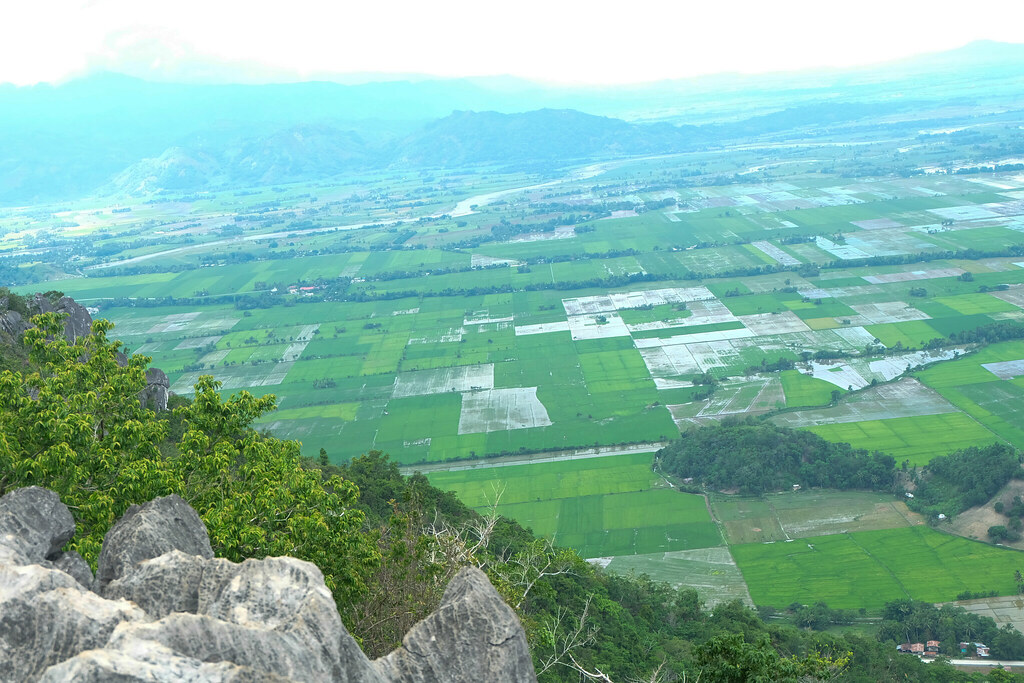 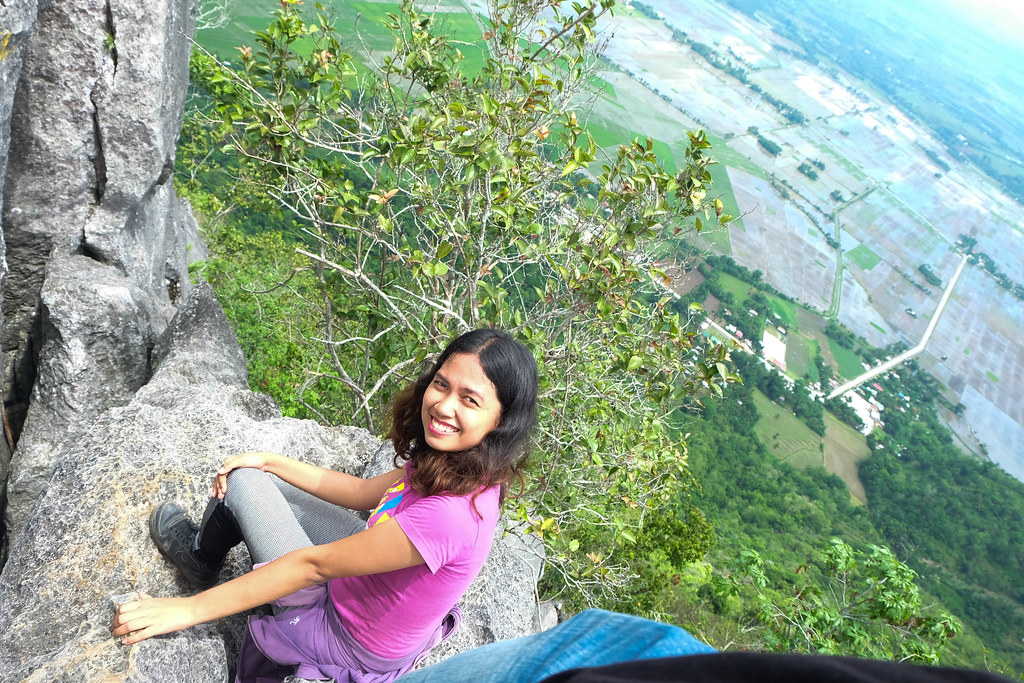 But some people freakin’ vandalized here and they don’t even know how to spell! SMH 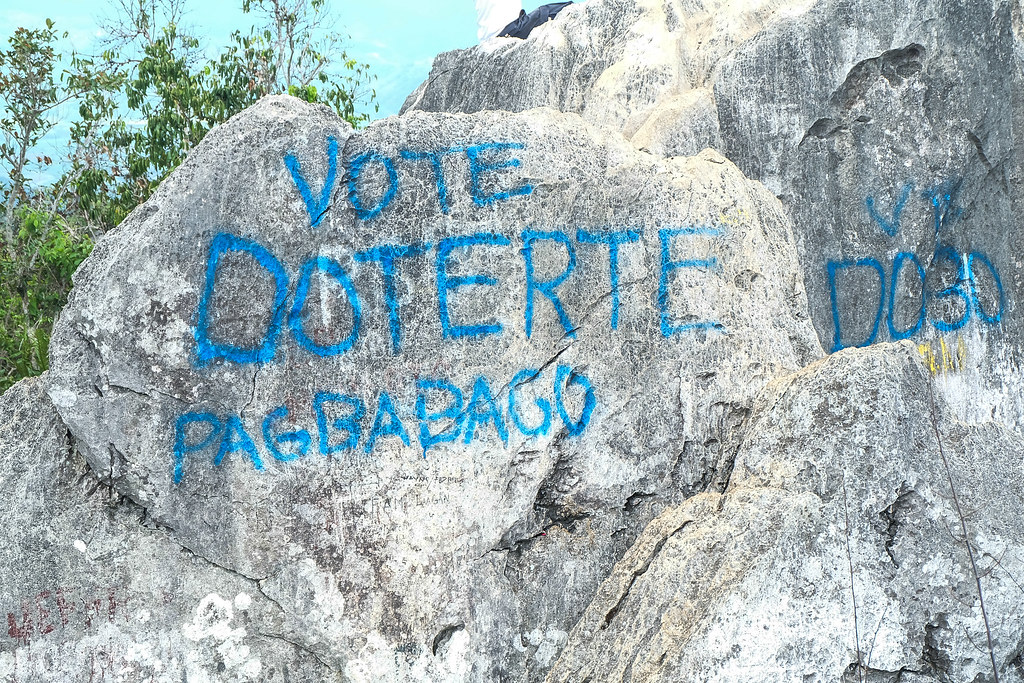 Now, getting to this rock was not an easy feat, I tell you~ And there wasn’t enough space for us to stand and all. Well, just imagine how much I had to endure to have these pictures taken. I do not have fear of heights but I do fear falling and dying!

Real situation before the photo ops though: 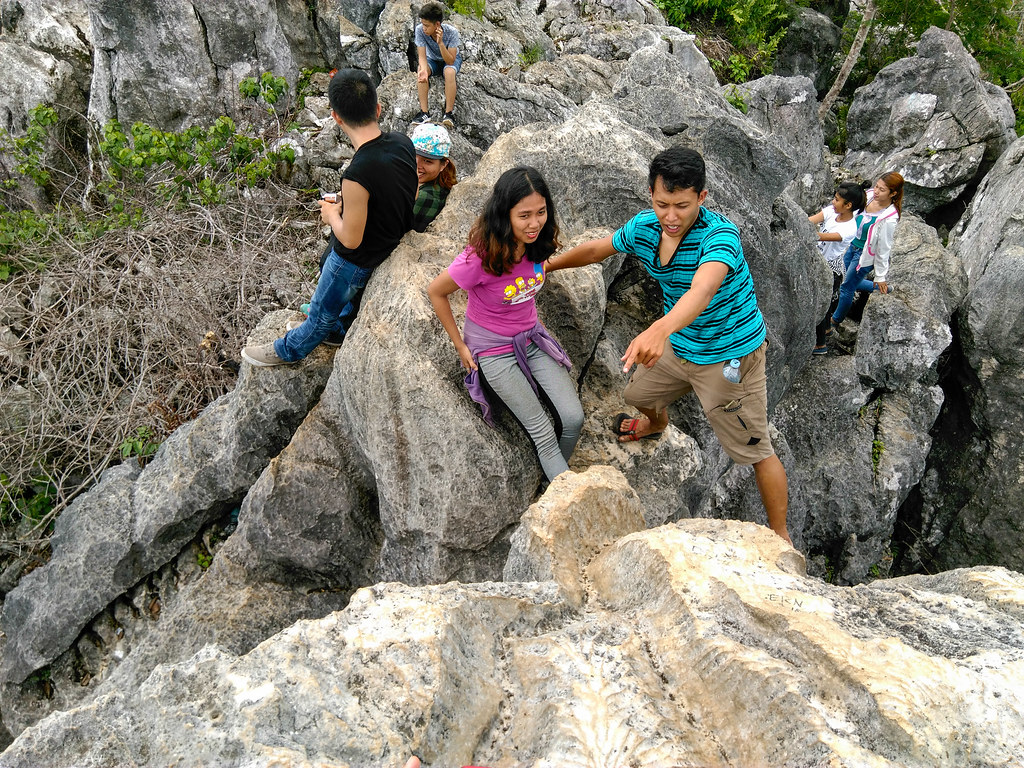 I’m such a scaredy-cat and he got really annoyed. Hahaha OKAY FINE SARREH 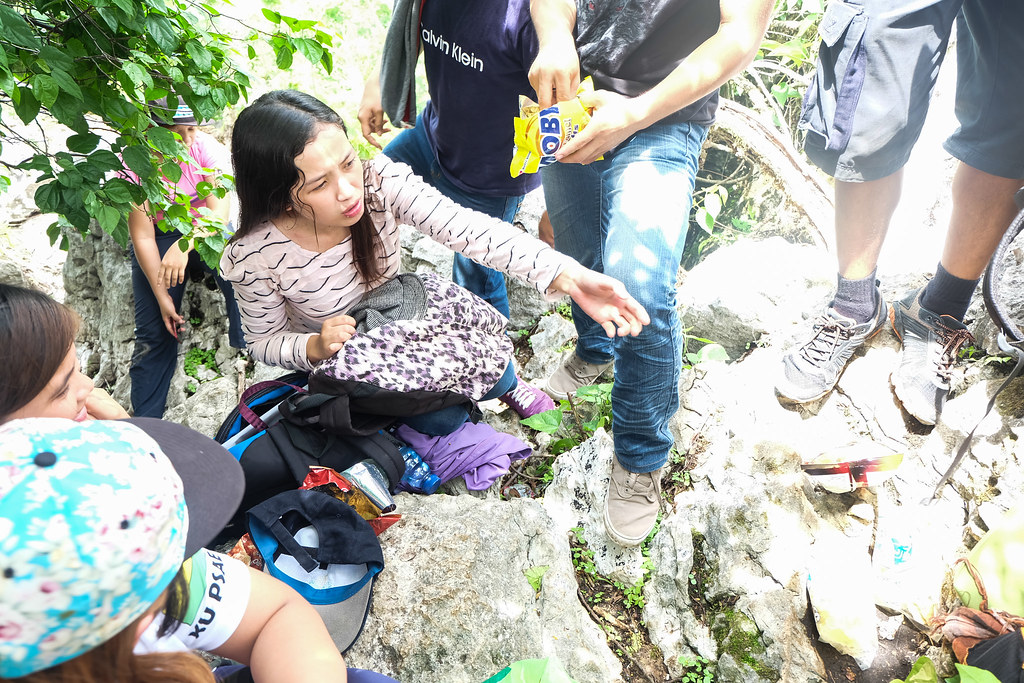 We had snacks while we rested (it was already noon by this time) and then we started going down. I was part of the few that came back last but whatever. Slowly but surely is my motto~ 😛

A late lunch followed in Valencia and then we proceeded to Lake Apo. I also didn’t know this existed – city girl? – but again, take me anywhere nice! Haha going there was sudden and unplanned. 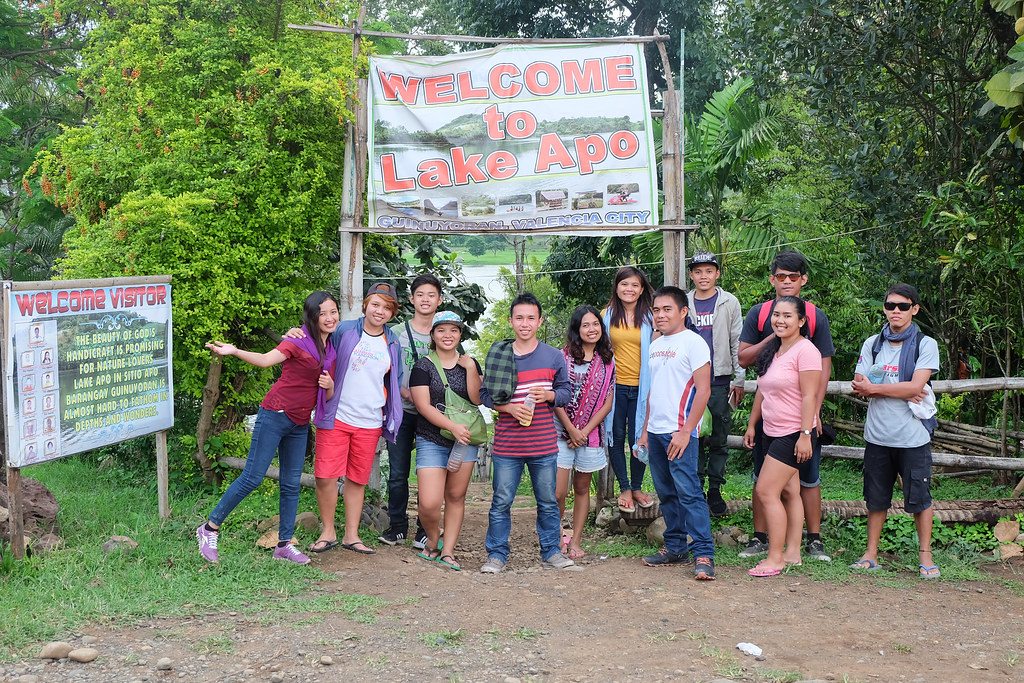 If you go there, you kinda need to have your own car since it’s really far from the highway. The roads leading there aren’t all cemented too. 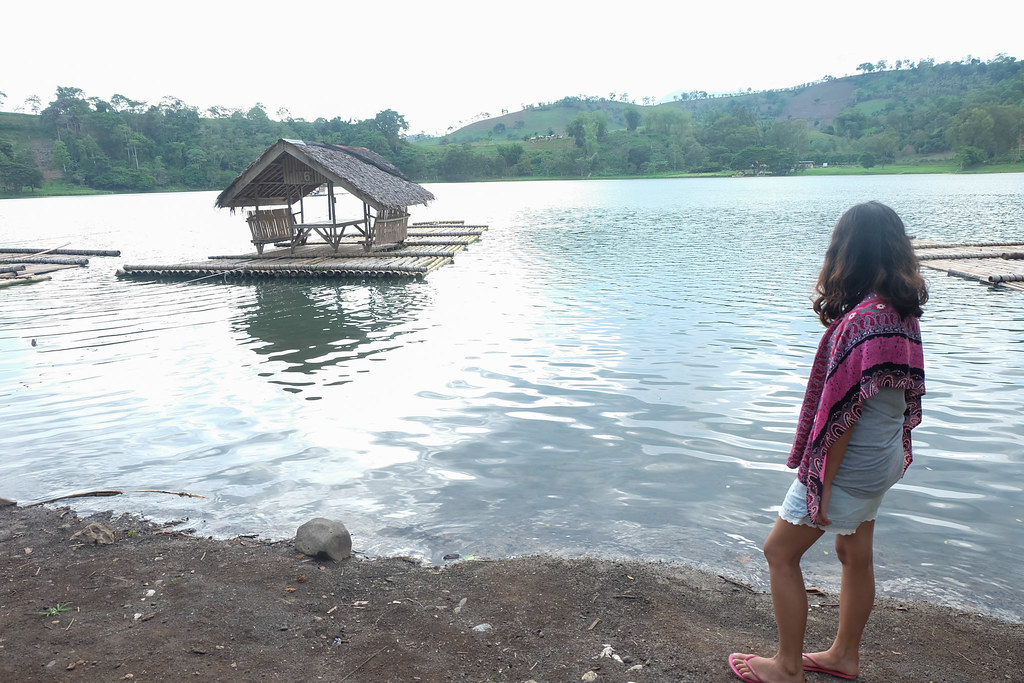 We rented one of those “house boats” for 300 pesos. It was originally for 330 pesos but we haggled. *WINK* 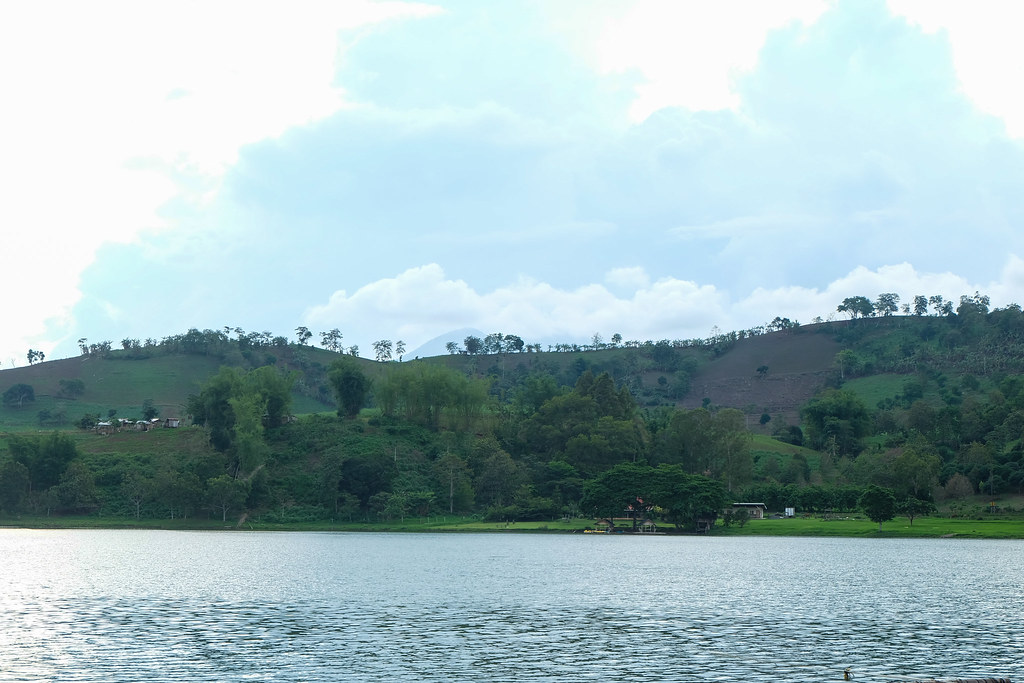 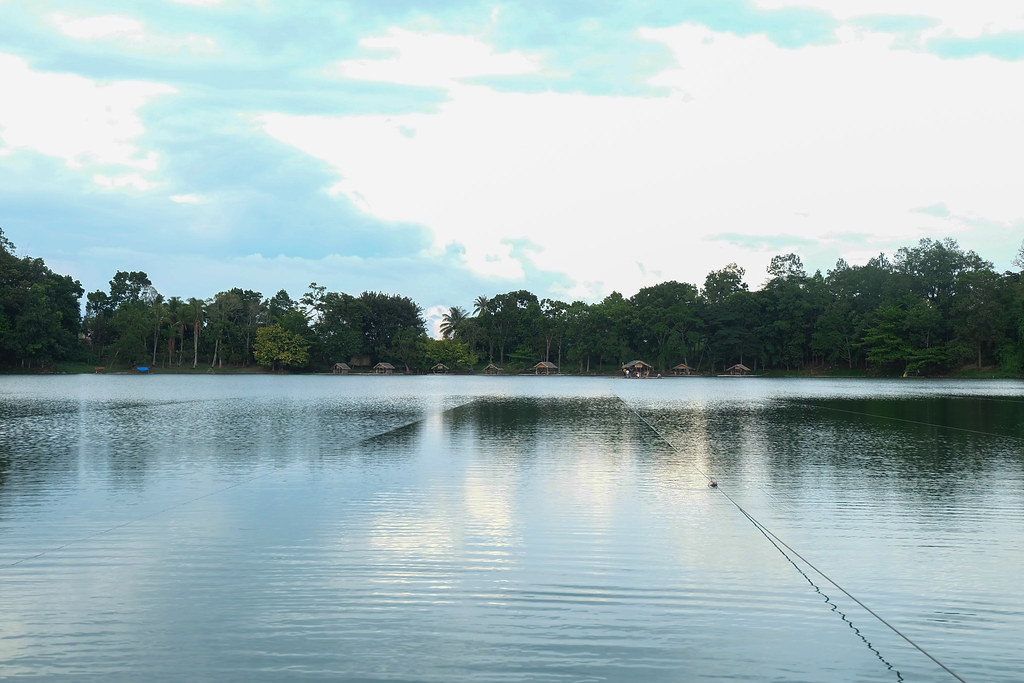 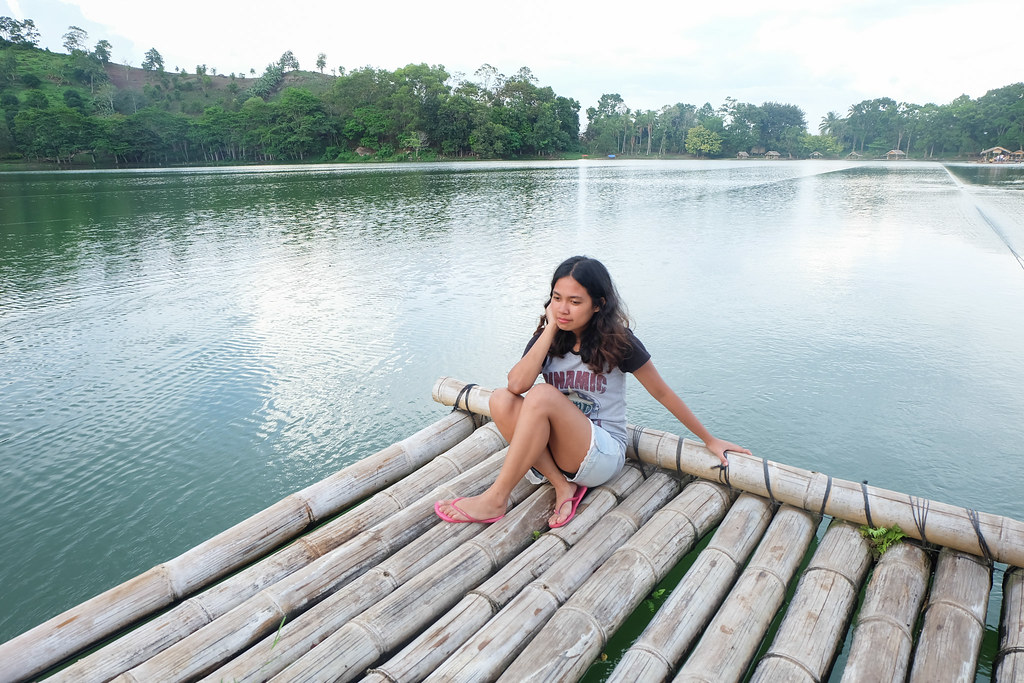 It was no doubt a nature-filled weekend that you can enjoy without spending a lot! With a large group, you can split the expenses and all that. But beware, body ache will be no joke~ I cannot stress enough how my arms and legs hurt even up to Monday at work. Then again, I’d say everything’s worth it. No pain, no gain, yeah? (^‿^v)